From Life is Feudal Wiki
(Redirected from Tier)
Jump to: navigation, search

Skills determine which actions a character can take within the game. To raise a skill mark it for raising in the character menu and keep the respective experience bar filled until the next skill tier is reached. Whether a skill is used or not does not effect its level.

There are three types of skills available in the game. To see them in the game, press L, and choose "skills".

Crafting skills, also known as Peaceful or PvE skills, allow the player to interact with and craft different objects and buildings in the game.

Combat skills enable the player to equip different types of weapons, armor, ride horses while fighting, and craft objects that can be used for combat (siege weapons). 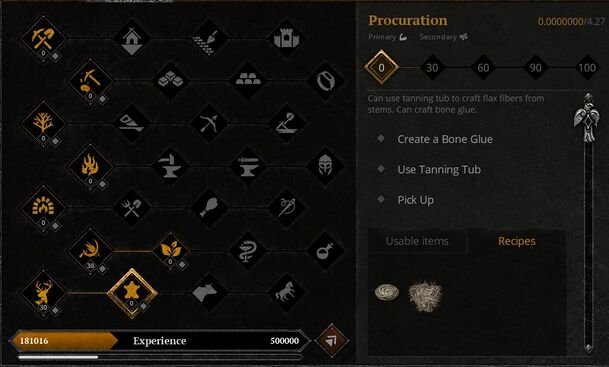 The speed at which skills can be raised is limited both by the availability of the experience points required and the raising time set by the game, which increase dramatically with later skills and higher tiers. Fortunately, a marked skill will keep increasing, even if the player if offline.

Reaching skill level 100 will take a HUGE amount of effort and time and may require quality 100 (Q100) work/items for some skills. For example a Q100 sprout planted with a Forestry skill of 99, results in a Q99 tree. Look at the Skills Window (hit 'L') then skills then crafting - and click any item to see the advantages of being of skill 100 - such as BONUS quality of produced goods, etc. Any item whose level <0> skill says "maximum quality of..." means that the quality of whatever the skill relates to is limited by your skill level.

Every skill exists within a branch. Skills that are not the first within a branch need to be unlocked by reaching a certain tier in the previous skill of the branch. Some complex items and buildings require skills in two or more branches in order to be crafted or built.

Every skill, except minor skills, has tiers. These tiers are reached upon leveling a skill to 30, 60, 90 and 100. With each tier new usable items, craft-able recipes or abilities are unlocked within that skill.

Unlocking a new skill tier requires level 30 in the previous skill. Some skill are unlocked by char creation and can be leveled freely but if a skill was unlocked by leveling the previous skill (tier 2 skill) this skill's level can only be raised beyond level 29.00 if the tier 1 level belonging to it has been leveled to 60.

So for example to unlock tier 3 of a skill:

You have a pool of skill points that is 1000 and every stat point put into intelligence increases the pool by 2. So one can have a maximum of 1200 skill points, that means one could reach maximum level 100 in 6 skills but not more. Accordingly one should decide carefully which skills one wants unlocked and which tiers one wants to reach,

Reaching level 90 in a skill will unlock its respective master title.

Reaching level 100 in a skill will unlock its respective grandmaster title.

In your Skills Window (default key: L) each skill has two levels; one in white and one in green. Your skill's actual level, noted in white, is your baseline skill level, independent of any modifiers. The second number, noted in green, is your actual skill level. The skill's baseline is modified

Actual skill levels do NOT unlock new crafting recipes or skill bonuses, only the baseline skill level does.