Outposts are buildings that can be built by guilds with a monument on unclaimed fiefs to claim additional fiefs. There can can only be one outpost or monument on each fief.

The amount of buildable outposts depends on your monument tier and a guild needs to hold a certain amount of fiefs to be able to upgrade their monument. 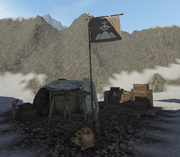 Outposts that are build in a second row and military outposts count into the limit of buildable outposts per monument tier.

To build the outpost, use Build - Outpost on any tile of an unclaimed fief, the location on that fief doesn't matter, it will always claim the whole fief.

The quality of that outpost depends on the used materials, the quality and type of the used hammer and your effective Authority skill level.

Each outpost can be upgraded from tier 1 to tier 3. It will raise the production rate of most outposts, the upkeep costs and makes it harder to downgrade and capture it.

The outpost's upkeep always have to be paid with coins (including God's Coins) and their upkeep depends on the tier of the outpost and the size of the claimed fief.

You can use Remote Outpost Support at a monument to remotely pay the upkeep of the outposts of that guild, using God's Coins and bypassing the maximum of support points.

Also note that this amount can be doubled with taxes.

You can add up to 4 slaves to an outpost. Each slave has a lifespan of 10 ingame days and raises the production rate of that outpost by up to 100%, depending on the quality.

Slaves appear as working NPCs around the outpost building and can get killed. A dead slave disappears for the current ingame day and will respawn with the next ingame day. He will also not raise the production rate for the ongoing ingame day.

Trading posts are a special type of outpost. They don't produce anything and you can't add slaves to it.

Each trading post has an own inventory for each account and you can use it to buy items from other players, offer your own items to other players and sell them to the crown to generate coins.

Military outposts are also a special type of outpost. It is the only type of outpost that doesn't require a connection to your claimed lands. It can be built on any unclaimed fief.

The main purpose is to lay Siege to another guild's claim.

You can add up to four slaves to them, they will appear as armoured archers and will shoot at any player in a certain range who has no enter permission on that fief.

Slaves also have a lifespan of 10 days but they respawn each 20 minutes after being killed.

You can use the military outpost as a rally point during the Judgement hour of that guild.

Life is Feudal: Your Own differences[edit | edit source]

Outposts do not exist in LiF:YO, with exception of the Trading post but it is treated like a normal building.