!! This are really outdated informations, please feel free to update this page with correct informations about Claim-system in LIF:YO

Land claims are sections of in-game terrain that are owned either by individual players or by guilds. There are three types of claims in the game: Personal Claim, Town Claim and Realm Claim.

Any guild, regardless of their status as a "Kingdom" or "Vassal" will be able to obtain the maximum size, tier 4 monument.

Each claim allows extensive modification of claim permissions for players set by the claim owner or guild leader:

During judgment hour (YO) the "Realm" claim becomes vulnerable to attack from guilds that have declared war on your guild. Activities such as trespassing will not affect their alignment and they can loot and destroy any object/building on the "Realm" claim.

For more information, see the Judgment hour (YO) page. 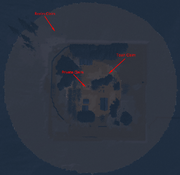 From 1 up to 100 tiles in area (size limited by authority skill). The size of a personal claim is a parallelepiped with an 18 tile diameter (9 tile radius) while having max skill (100 tiles).

The "Town" claim is where a guild will have most of its buildings and valuables. Everything on the town claim is safe and cannot be looted or destroyed.

The "Realm" claim is where a guild will have mostly only have farming fields and trees for logging. Everything on the realm claim is vulnerable during judgment hour.

Guilds situated next to each other are competing for Realm Claims. A guild with more support points in their Monument and with a higher level of the Monument has a higher pressure. In such case, the result is that all guilds situated next to each other with their claims colliding have less realm claim lands in the area where they collide with each other and they all suffer some losses. Once they have an equal level, they will affect each other with equal pressure. Town claim zone is never affected by this mechanic and always occupies same space (20 tile radius). This means that it is better to have your most valuable assets in the City (Town) Claim, protected by high walls, while less valuable resources, farms etc are on the Realm Claim.

Rules that allow destroying Claims differ on Red Worlds and Green Worlds. Refer to this part of Major Update guide for details on the new game mechanics.

The minimal distance (tiles) between claims, outposts and server borders are shown in the Table below. You can’t build a claim or outpost closer than the minimum value.

* Radius values are measured in in tiles.

Life is Feudal: Your Own Differences[edit | edit source]

In Life is Feudal: Your Own the claim mechanics are a lot simpler.